Have you ever visited another place in the world and left a piece of your heart there? That’s exactly how I feel about the south of France. I felt so at home during my ten day solo adventure last year. The region felt so familiar to me it was almost as if I had lived there before. Déjà vu! I felt an air of familiarity everywhere I went, especially in the Provence region.

Perhaps it’s because their terroir is very similar to my home in California’s wine country, or because the language is easiest for me to understand having studied it in school. Or perhaps it’s because of my heritage. My grandfather was French and he would sing the loveliest French songs to me when I was little.

Last fall I traveled solo on a ten day adventure through the south of France, I visited the wine region of Bordeaux, colorful Aix-en-Provence, quaint seaside Cassis, the ancient hilltop towns, and scenic Nice & Monaco (which I have yet to write about). Today’s trip is to charming Avignon, a one day adventure I took while staying in Aix-en-Provence. 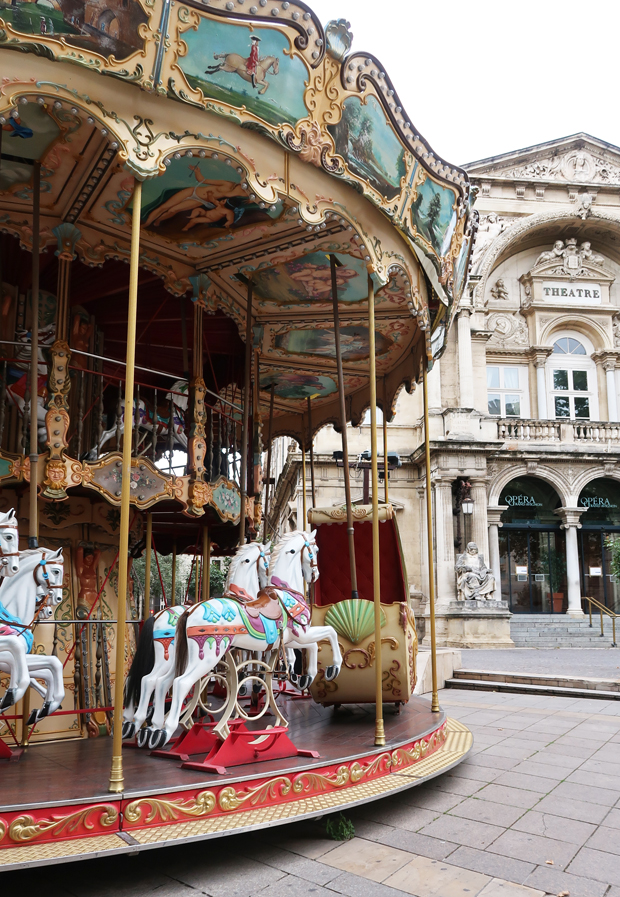 I’m familiar with the French language, I speak enough of it to order a meal or ask for directions but the imperfections in my pronunciation immediately identify me as a foreigner. Despite that, I had the most amazing experience while I was there and found most of the French people to be incredibly kind and welcoming. Once, I met a horribly grumpy old Frenchman on a train who bickered with me and claimed I was sitting in his seat (he was wrong) but I graciously moved over a row just to smooth his ruffled feathers. (Every society has its share of grouchy people.) Other than that one altercation, I’ve always had pleasant experiences with the French.

Train travel through France couldn’t be easier. You buy a ticket at a kiosk or in advance online and off you go. On this day trip , I hopped on a train from Aix-en-Provence to Avignon and arrived in less than an hour. 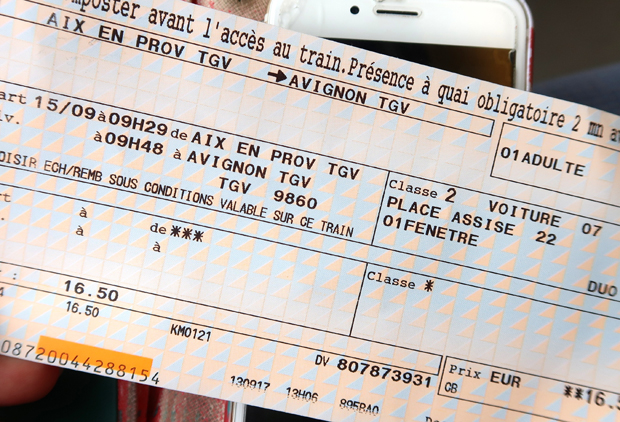 I’m a street eats kind of traveler whenever I’m somewhere where I have a lot to see, it’s cheaper and quicker to eat on the go and work it off by walking around town a few miles. I ate my share of quiche while in France, I couldn’t get enough. 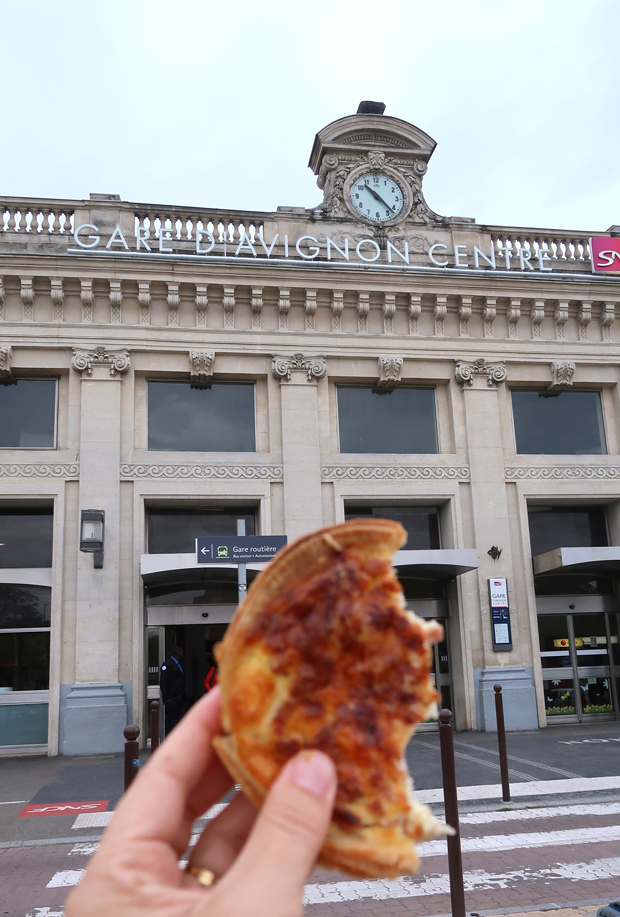 Avignon is an ancient walled city and so walkable, you can see all of it in a day. You’ll want to see the top sites and that include the Palais des Popes (Pope’s Palace). It’s a magnificent structure and if you climb the steps, you’ll see views of the city beyond and Rhone river below. 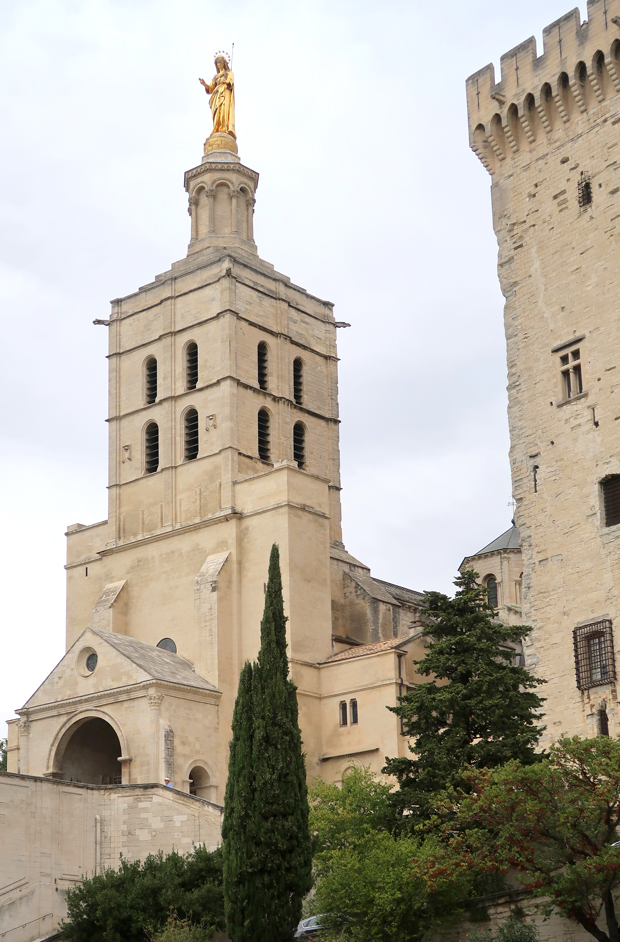 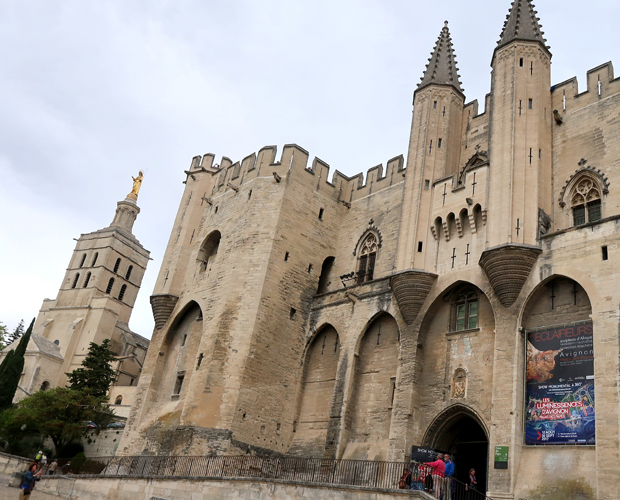 My home base during my stay was colorful Aix-en-Provence, however I noticed during on my long walk around town that Avignon’s architecture was more neutral. 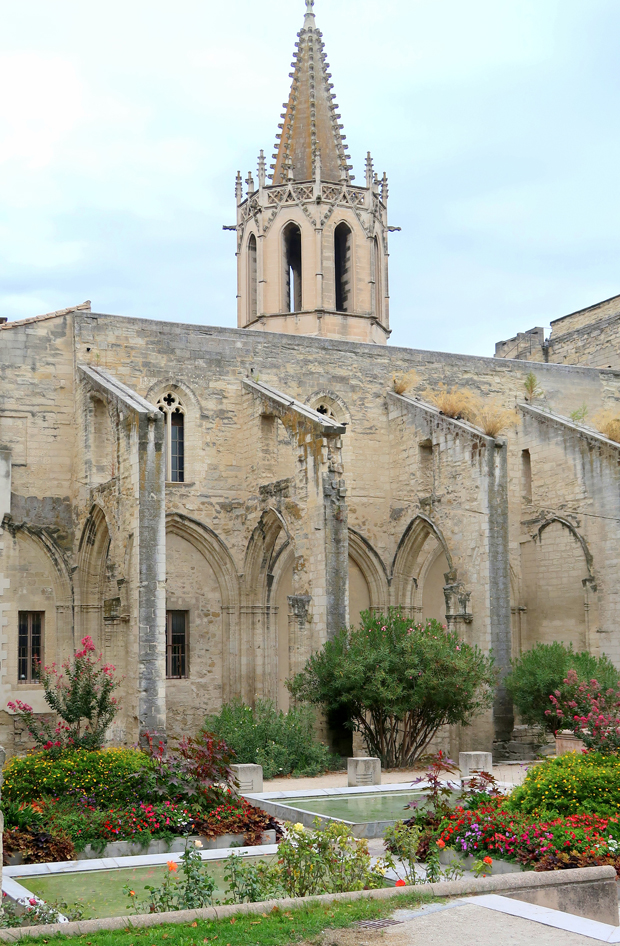 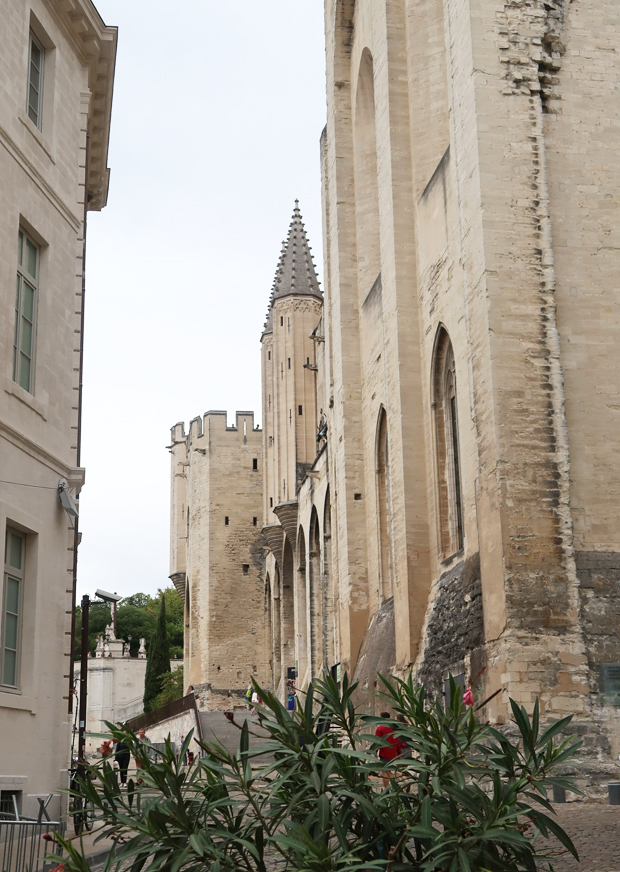 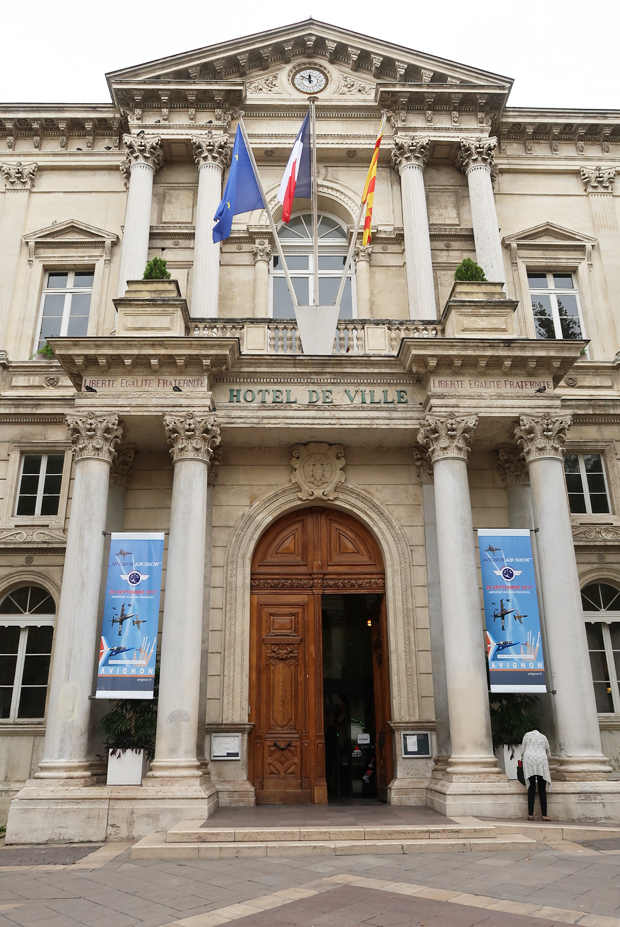 Every now and then I’d see pops of color on the storefronts, signs, or shutters, but for the most part the architecture is a lovely pale clay hue. 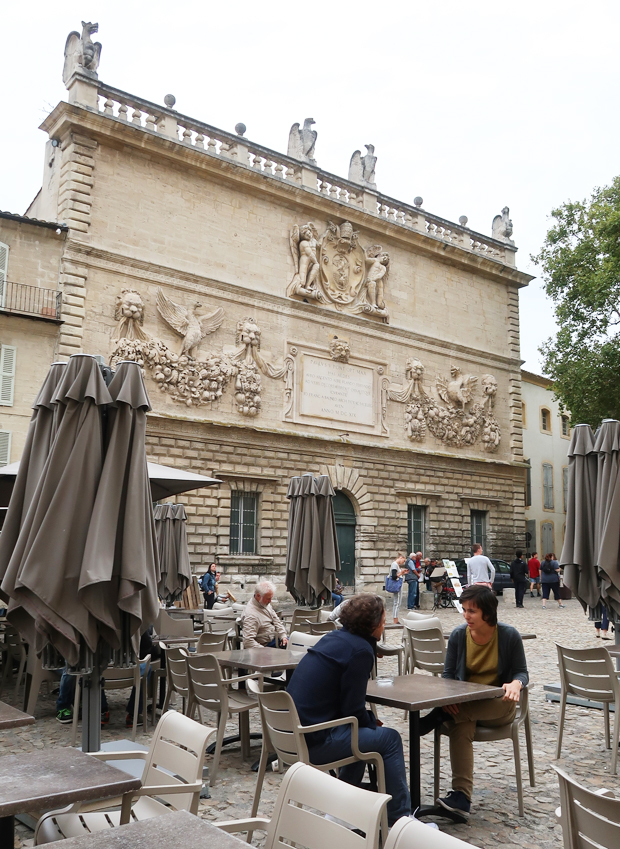 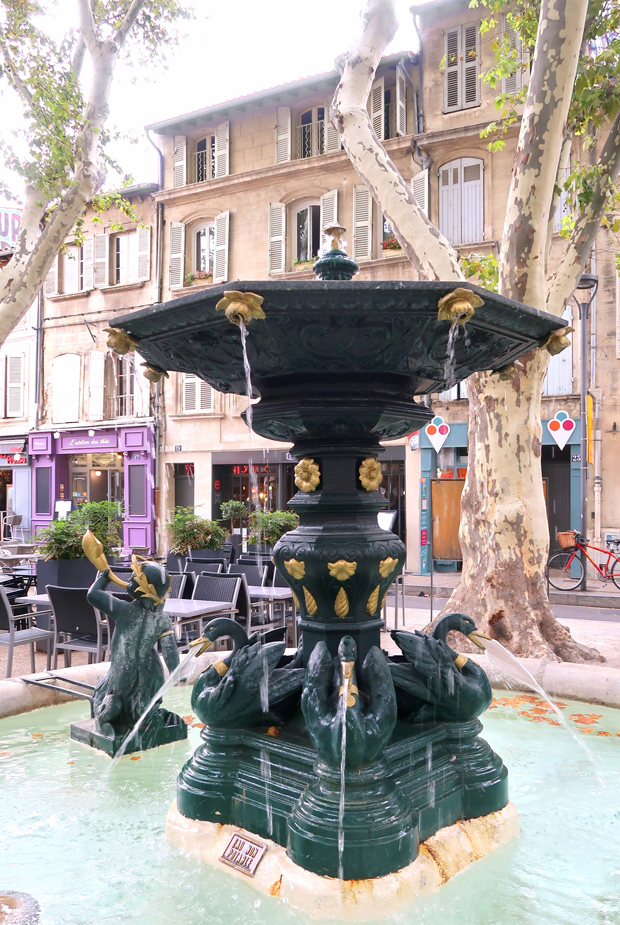 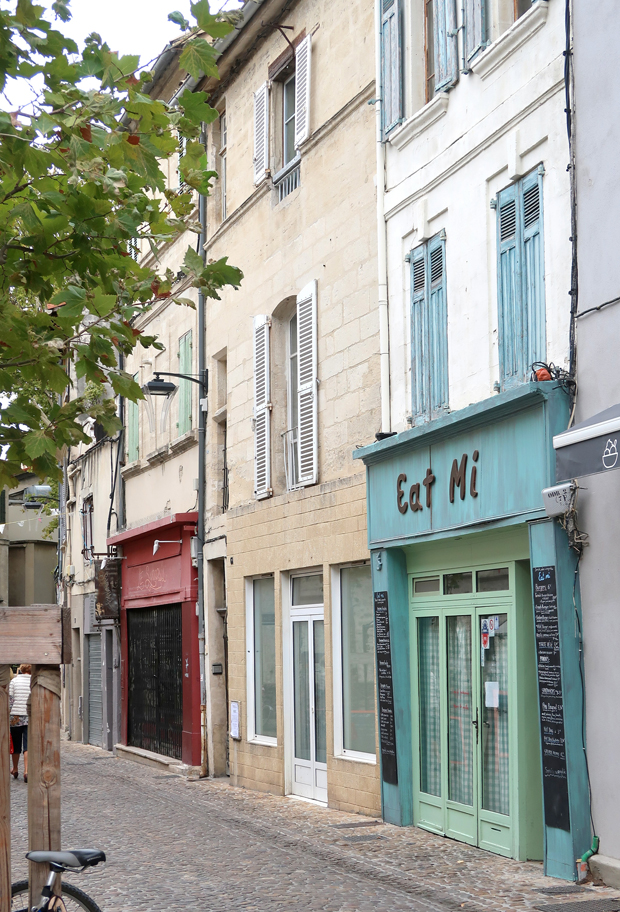 A highlight of my walk was Les Halles, it’s one of the most popular places in Avignon. The exterior has an amazing three story living wall of greenery, so lush and beautiful! 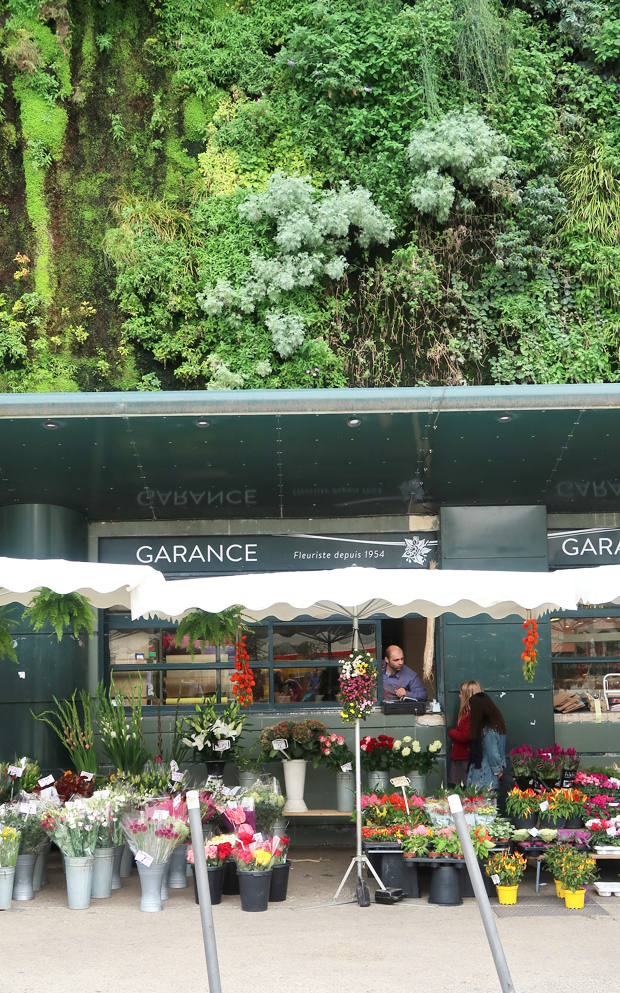 Les Halles is a giant market of produce, flowers, meats, seafood, all local goods. Inside is the market where locals do their shopping. Imagine shopping here every night for your dinner, wouldn’t that be amazing? 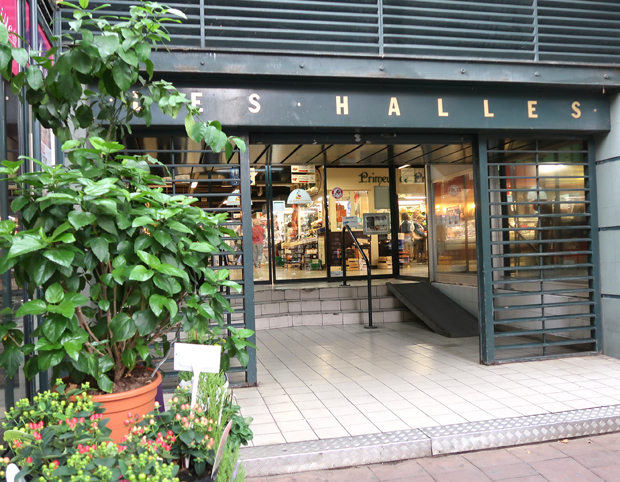 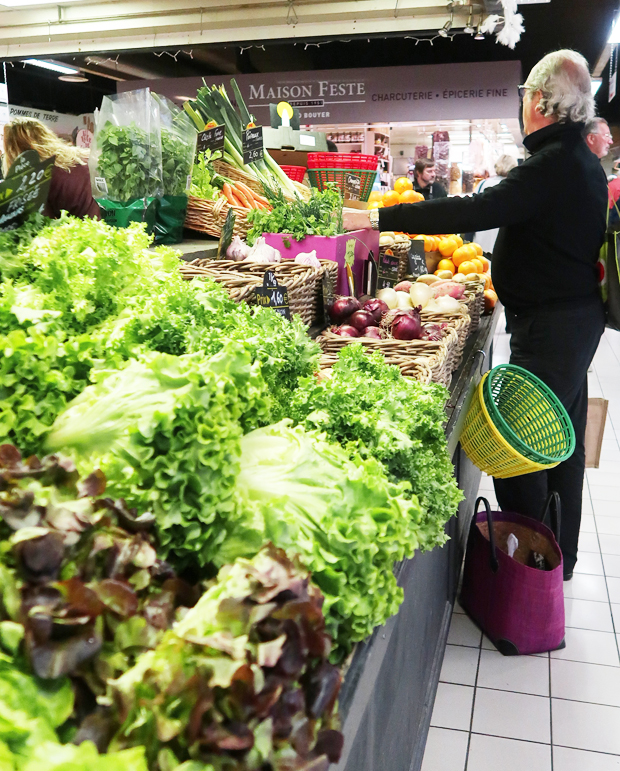 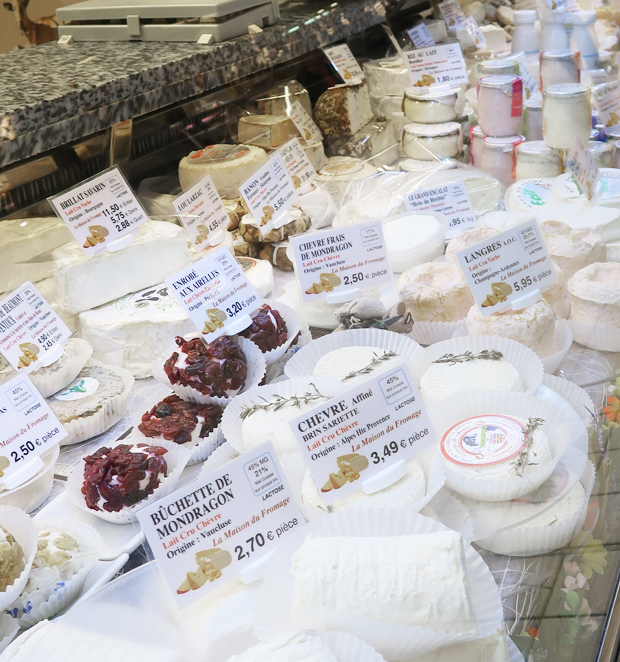 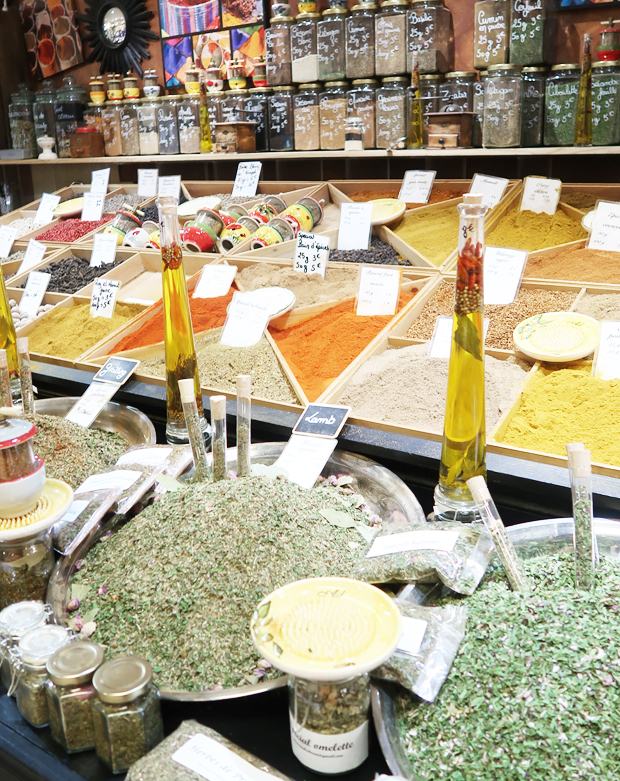 I was charmed by the groups of men playing cards inside Les Halles, it was a club where they met each day. I had to stop and watch them for a few minutes, it was clear to me they were enjoying their coffee and their game. How true is it that the simplest things in life that bring happiness, it’s not wealth or fame, but pleasure found in the company of good friends. :) 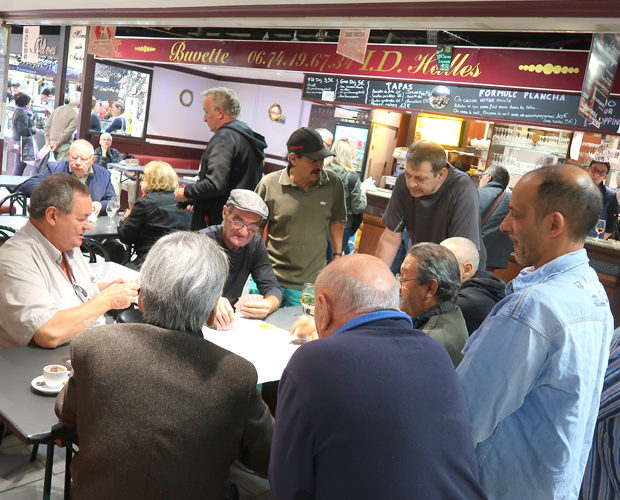 Avignon like any town in France has its share of shops and cafes where you can pause for a snack (hello crepes!) or for lunch, dinner, coffee, or a drink. 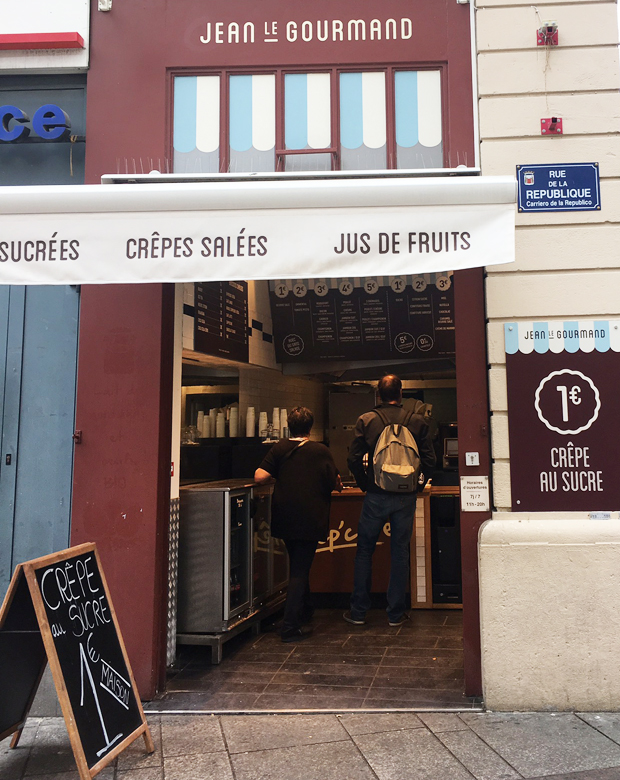 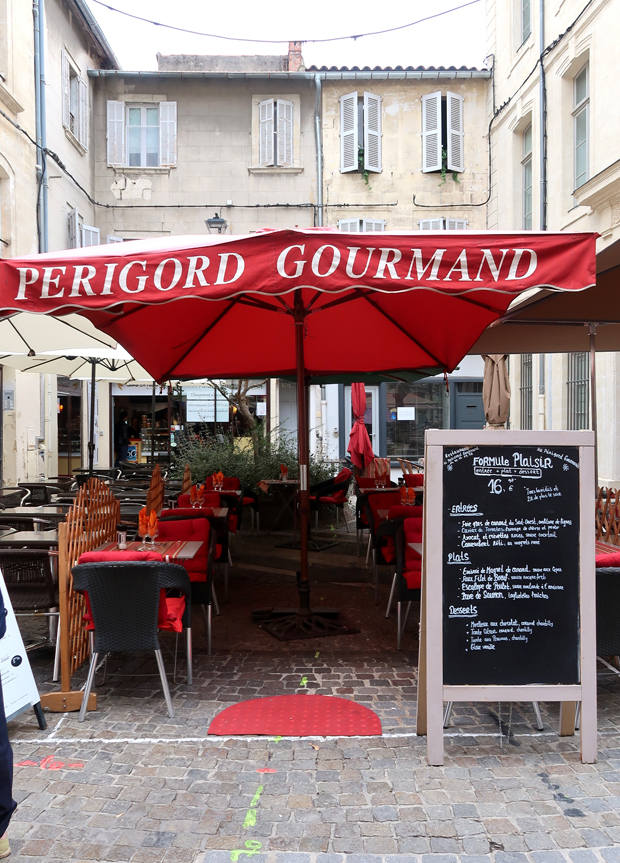 After walking the town, I had an hour to wait before catching an afternoon tour to the Pont du Gard so I had lunch on the main street at a cafe (quiche again!) and sat just watching a blend of people stroll by, some locals, some tourists, all exploring this town with so much history. 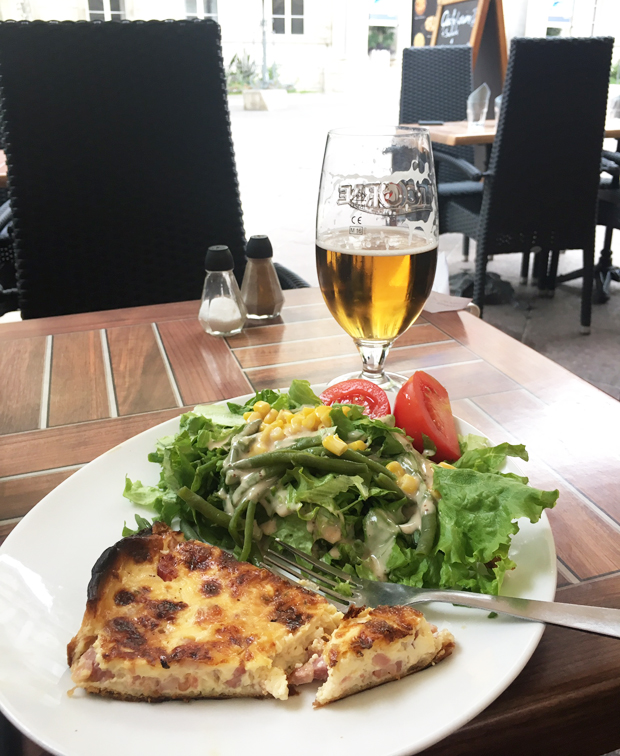 That afternoon I climbed in a van with 8 people from different parts of the world and an English speaking guide drove us through Arles and then to see the famous Pont du Gard. This first century Roman aqueduct is huge and you can walk across it, the picture doesn’t quite capture how impressive it is. 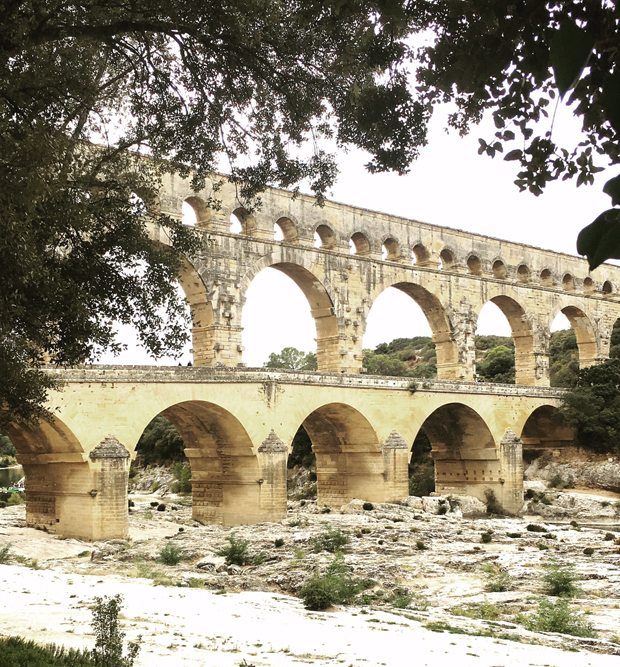 When you’re traveling solo, there are long periods of silence and it leaves a lot of time for contemplation. I remember thinking to myself, I could get used to living in the south of France, their relaxed pace of life, their daily trips to the market. I’ve noticed in my travel through Europe that most people live smaller and simpler than we do in the US. Their cars are smaller, and a lot of folks don’t own a car at all, they rely solely on bicycles or scooters or the well planned public transportation. Their homes are smaller too, they have far less stuff and square footage than we do. They’re happy in their simple lives, regularly meeting up friends down at the local cafe or pub.

There is this graceful flow to their lives and I found myself wishing I could live in France for an extended period of time. I want to immerse myself in a culture different than the one I’m living in, knowing there will be awkward moments during my residency but embracing that feeling that whenever I’m outside my comfort zone, great things happen.

Has this ever happened to you? Where you felt so at peace, so happy, so comfortable in a different part of the world, and you envisioned living your life there? How many of you have had this experience?

Where do you dream of living abroad? I’d love to know.

The story of the Florida hall bathroom remodel sta

The Mediterranean is filled with enchanting places

I wish summer would never end! This macrame tree s

Weekend links are live on live on the blog and inc

Shared my summer skin protection favorites on the

It’s a beach vacation in a bite! Find the recipe

Greetings from the sandy beaches of Florida! On th