This bathroom space was a six week overhaul that I finished just a few days before I left Florida. As I mentioned earlier in the year, we bought a house in Florida with plans to eventually move there full time. I spent most of June and July there and tackled a few spaces on the list of rooms to renovate.

The hall bathroom was a priority because it was very dated and also a space that everyone will end up using, guests included. There are only two bathrooms in this home and I wanted this one to be a blend of mid century and coastal style and include a bold botanical wallpaper. 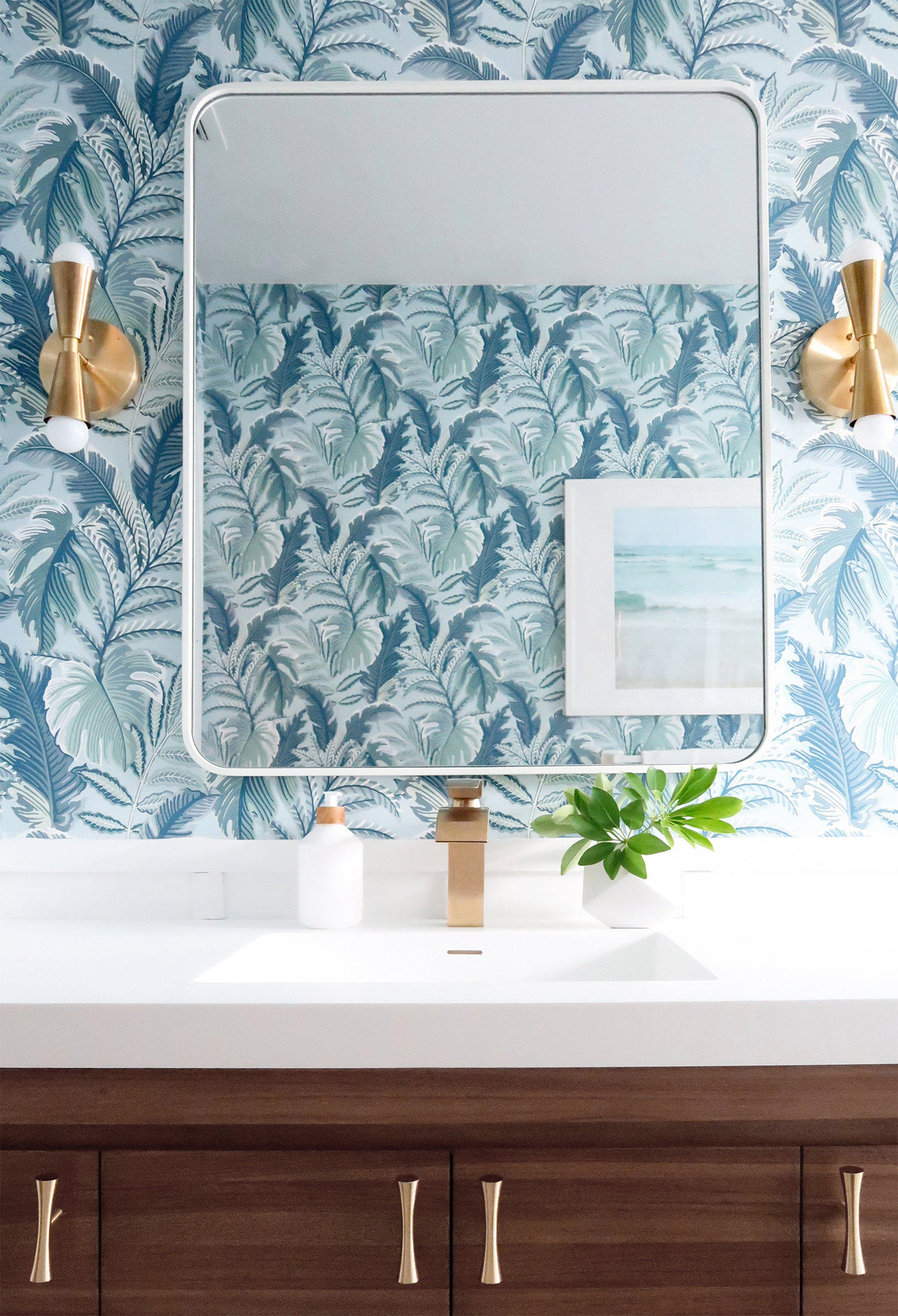 When I started in June there was a monstrous florescent light fixture on the ceiling with an old fan, a dated laminate top vanity, and dingy porcelain tile floors. 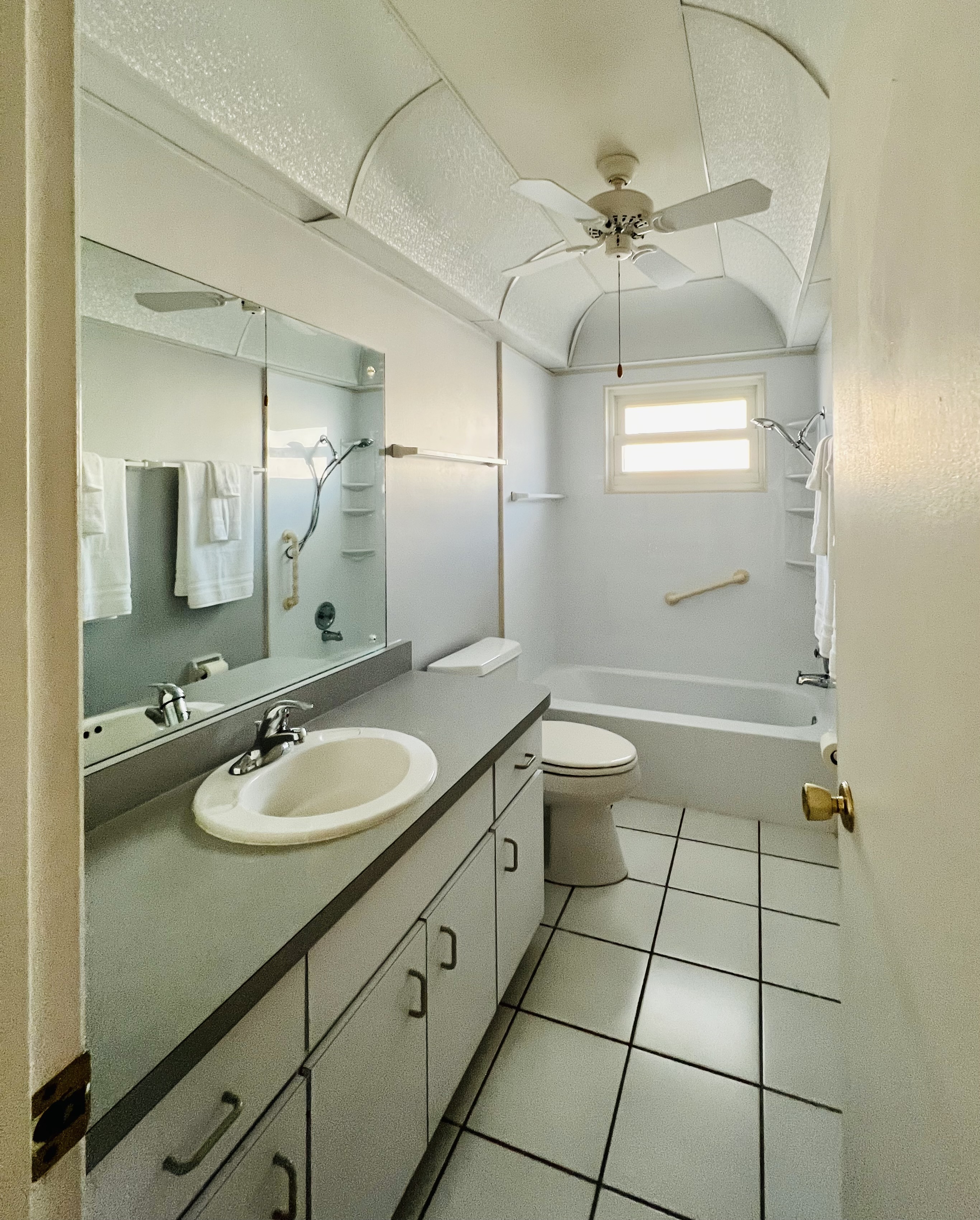 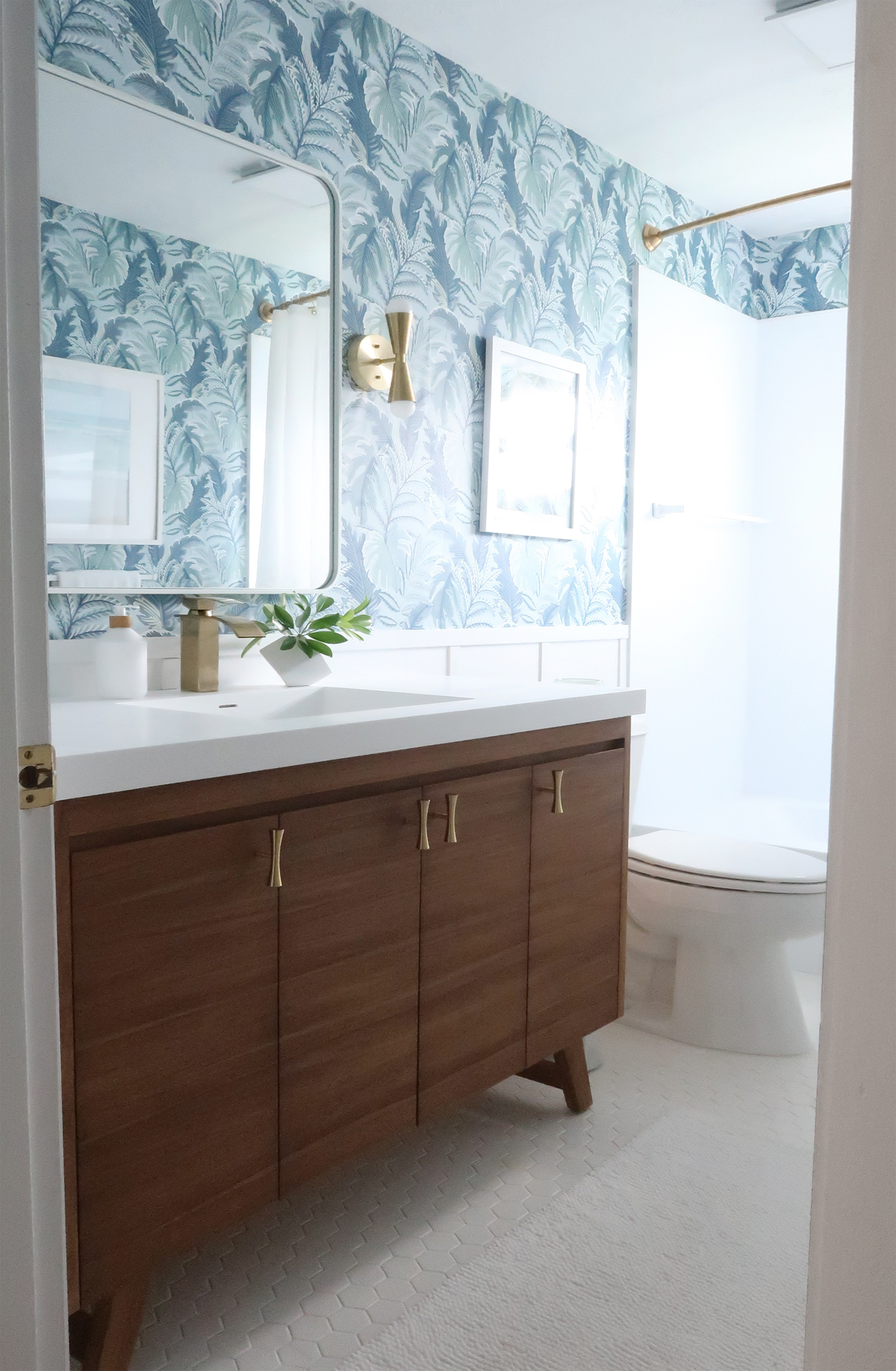 The first step was removing that gigantic light fixture which we hired professional electricians to do. The bathroom had no venting in it so where the ceiling fan used to be we added an LED light/fan combo and I had the electrician add new wires for sconces on either side of the mirror.

The next step was removing the old vanity and replacing the tile floor. The house was built in the 1960s so I chose a classic white hexagon mosaic for the floor. Once the new floor was in, I installed the board and batten, then the vanity, then the wallpaper.

I like to mix finishes in bathrooms so I mixed white with gold this time. I repurposed the old white towel rod and purchased a rounded corner white mirror to complement it. The faucet, sconces, and hand towel bar are brushed brass. I love how the shape of the cabinet pulls mimics the shape of the mid century sconces. 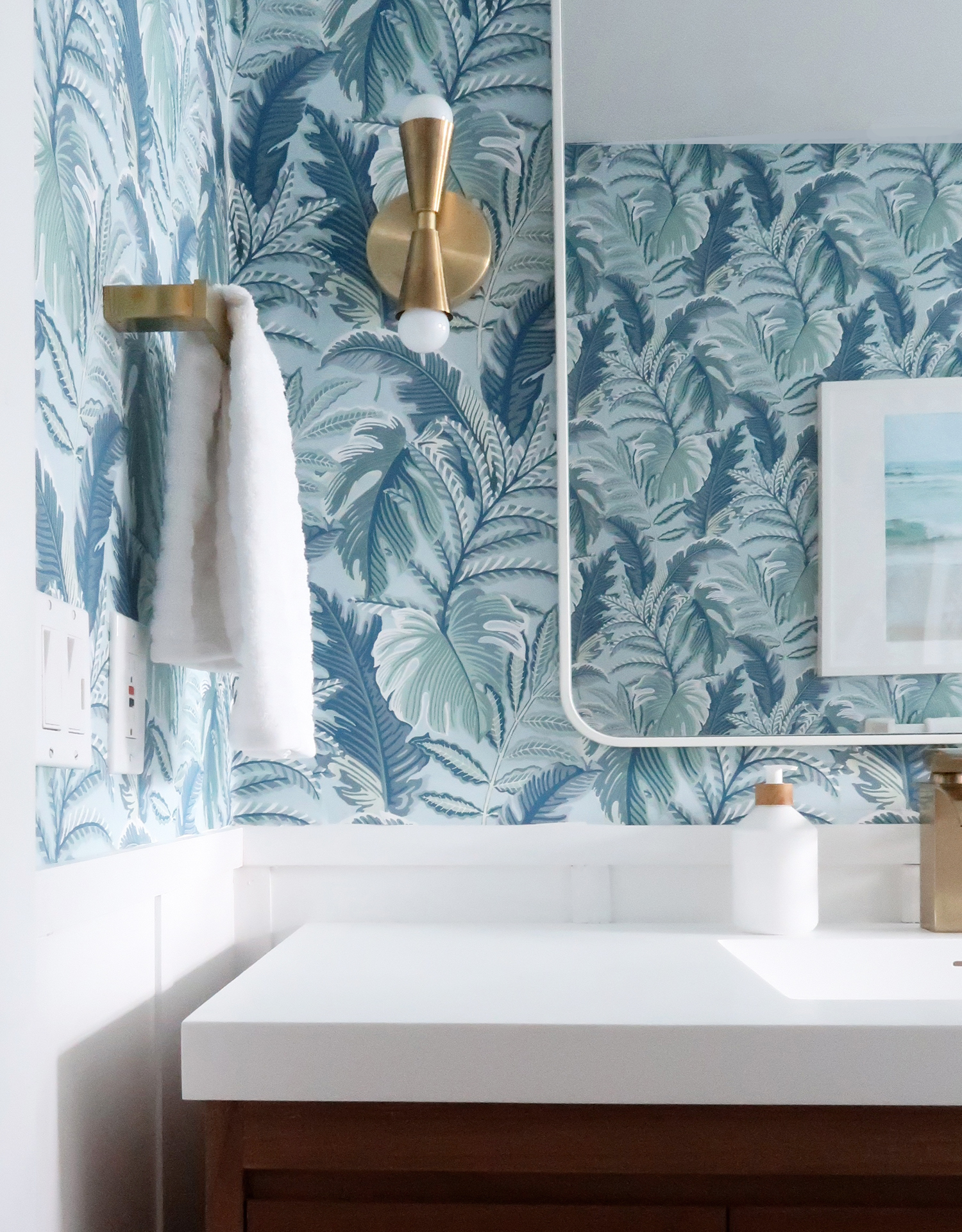 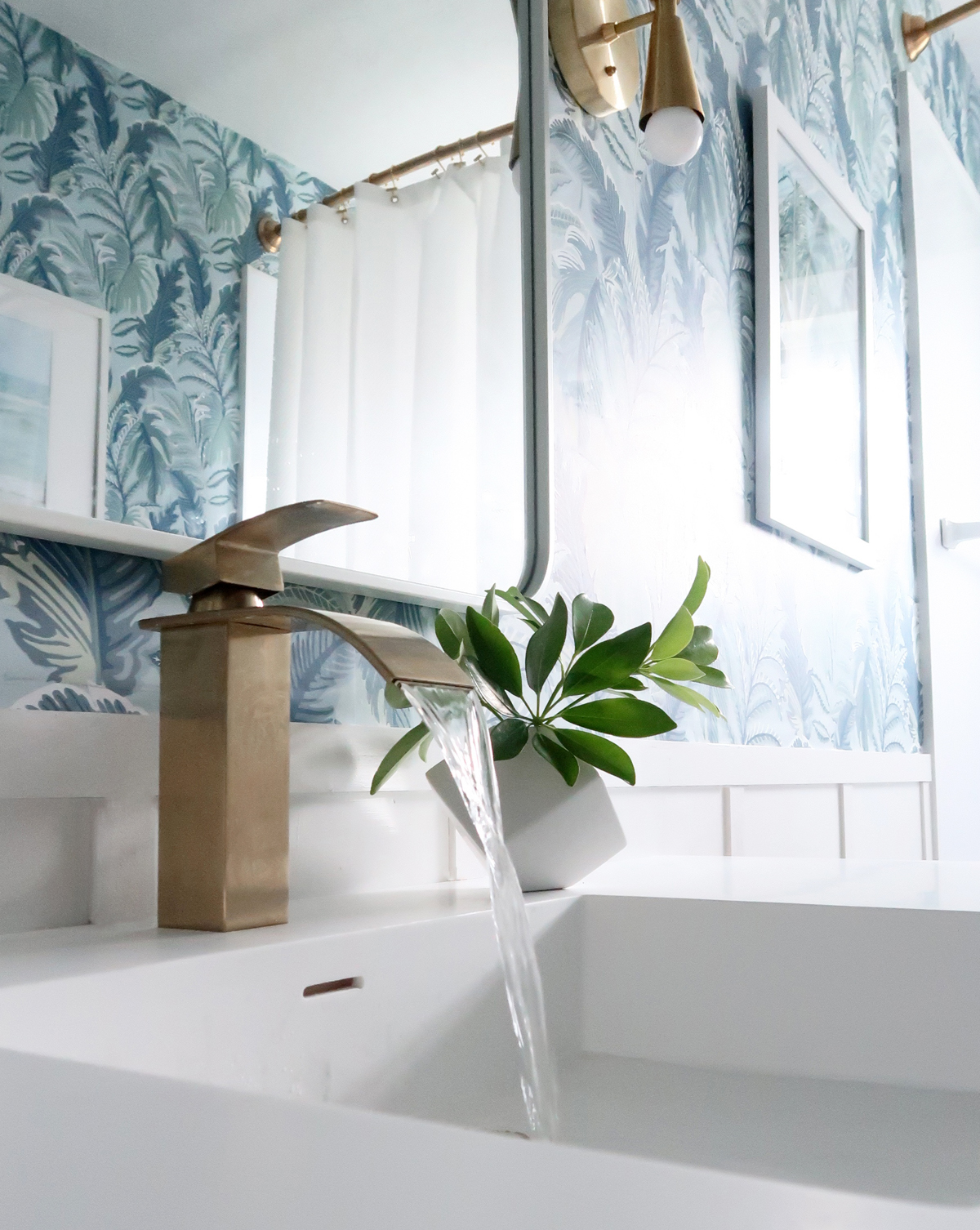 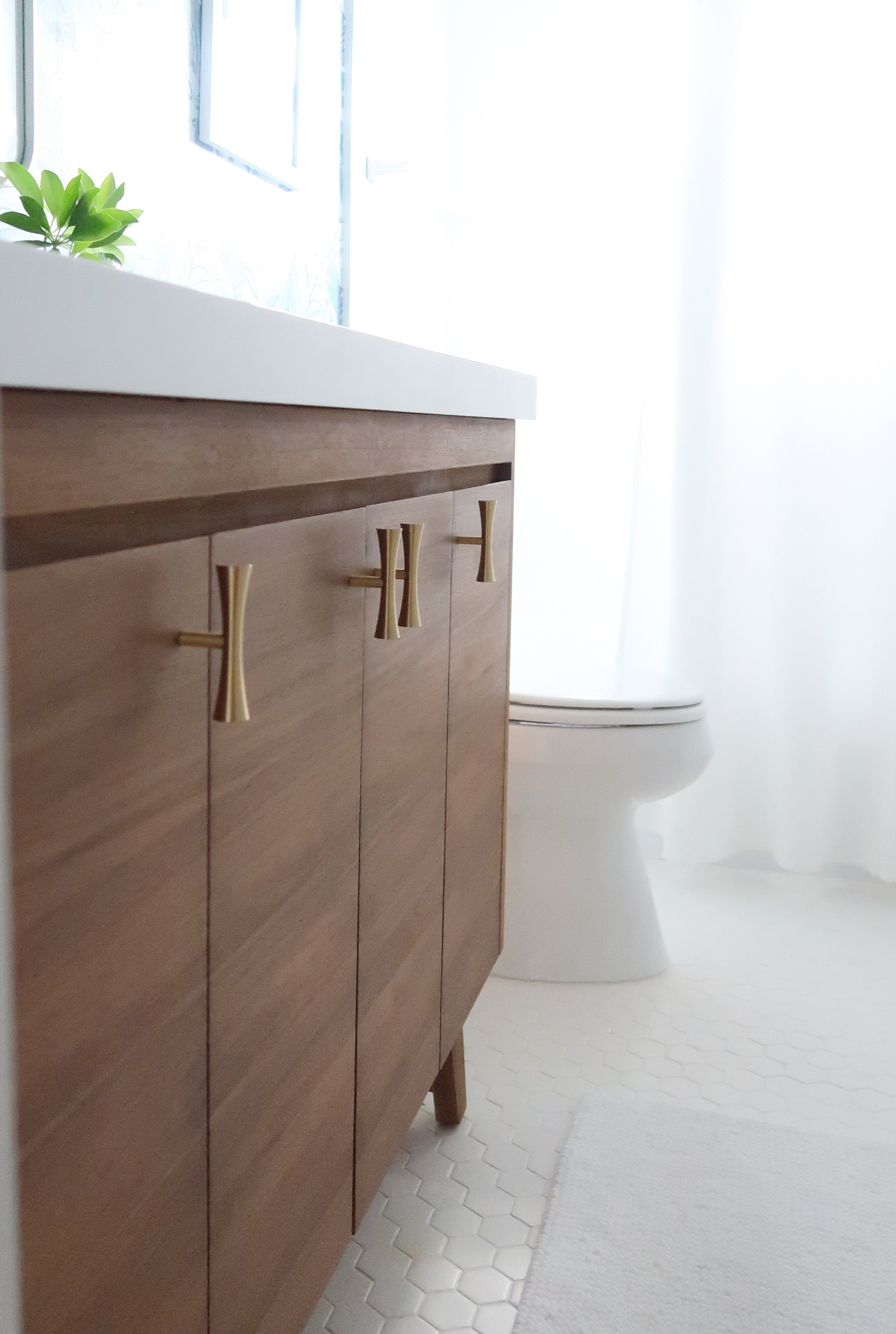 The wallpaper is a bold botanical motif, I picked a palm leaf pattern to echo abundant variety of palms in Florida. I installed it myself with careful application. It’s not difficult to do but it does take time to get it just right.

This wallpaper required I add the adhesive myself, it’s not peel and stick or the kind that’s prepasted. I actually like this style best because you add the paste to the wall with a roller and the paper goes on top so for me it’s easier to move around to get the seams just right. I’ll put a video on Reels to show all the steps and another for the DIY board and batten wall treatment. 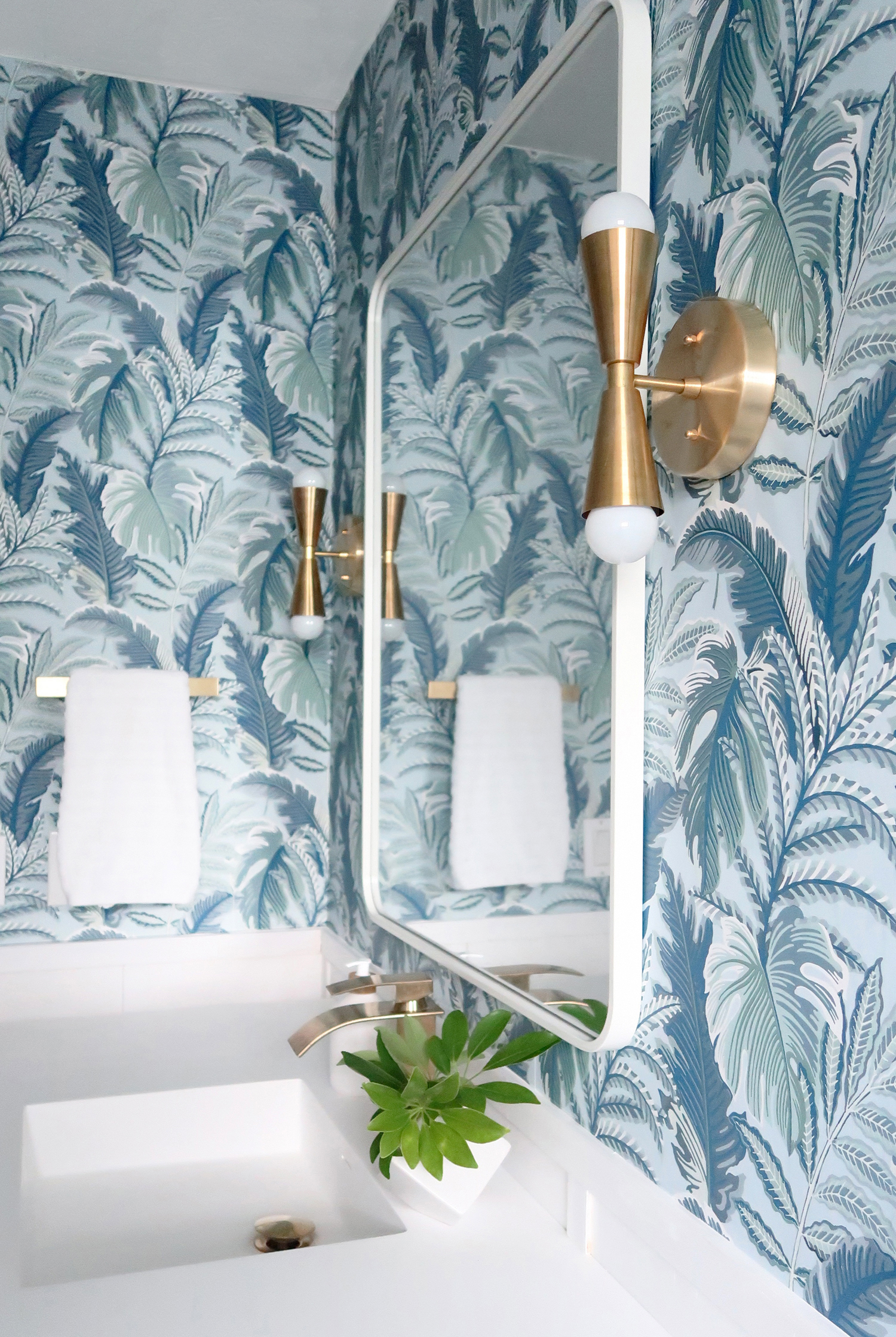 On the opposite wall is the same board and batten wall treatment, the bold wallpaper, and this Gold Coast art print is framed above the towel bar. 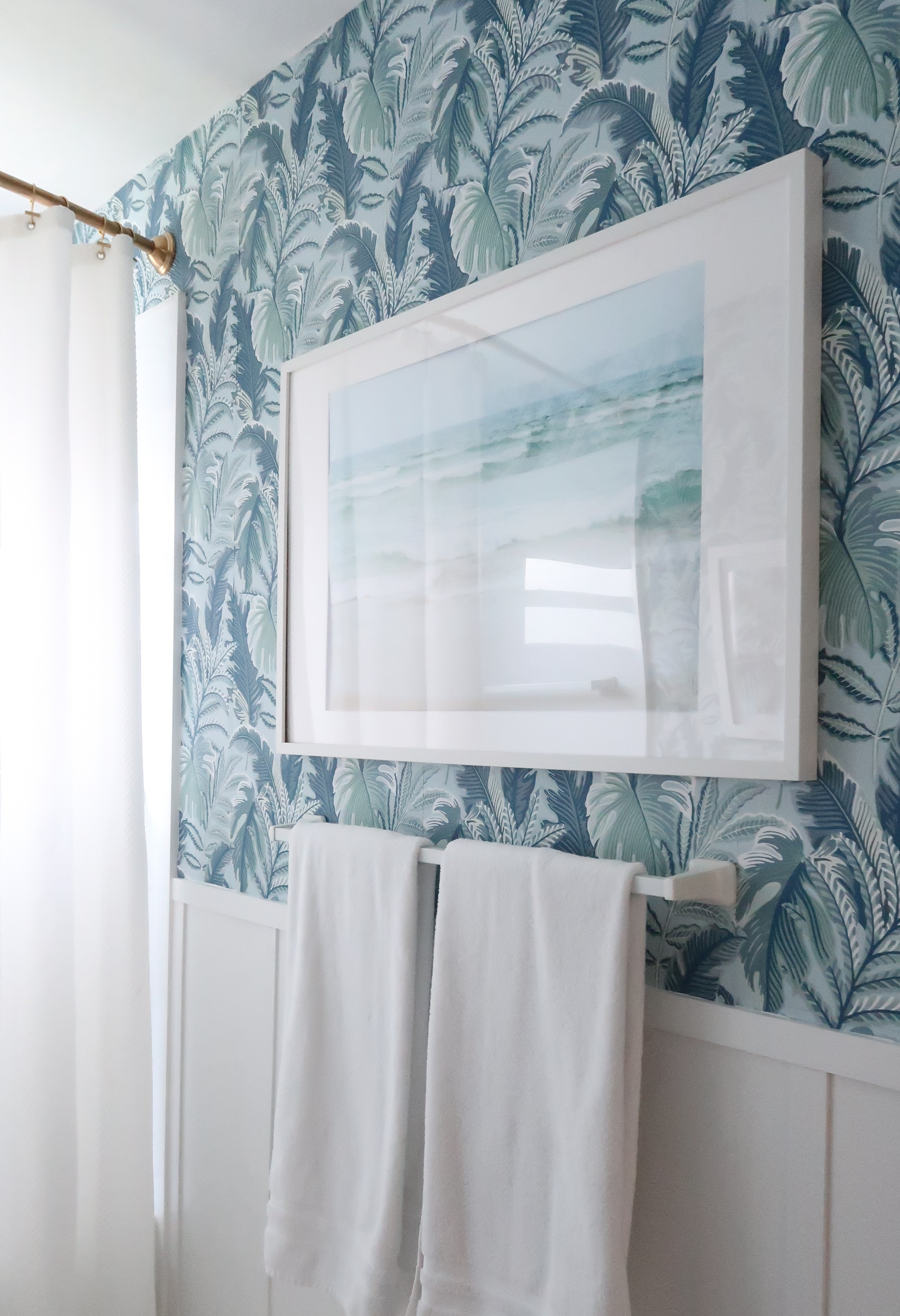 I installed a long shower curtain and liner with a fixed brushed brass rod, I like golden hue against the blue and white. We didn’t change anything out in the shower but may replace the white fiberglass liner with tile in the future. 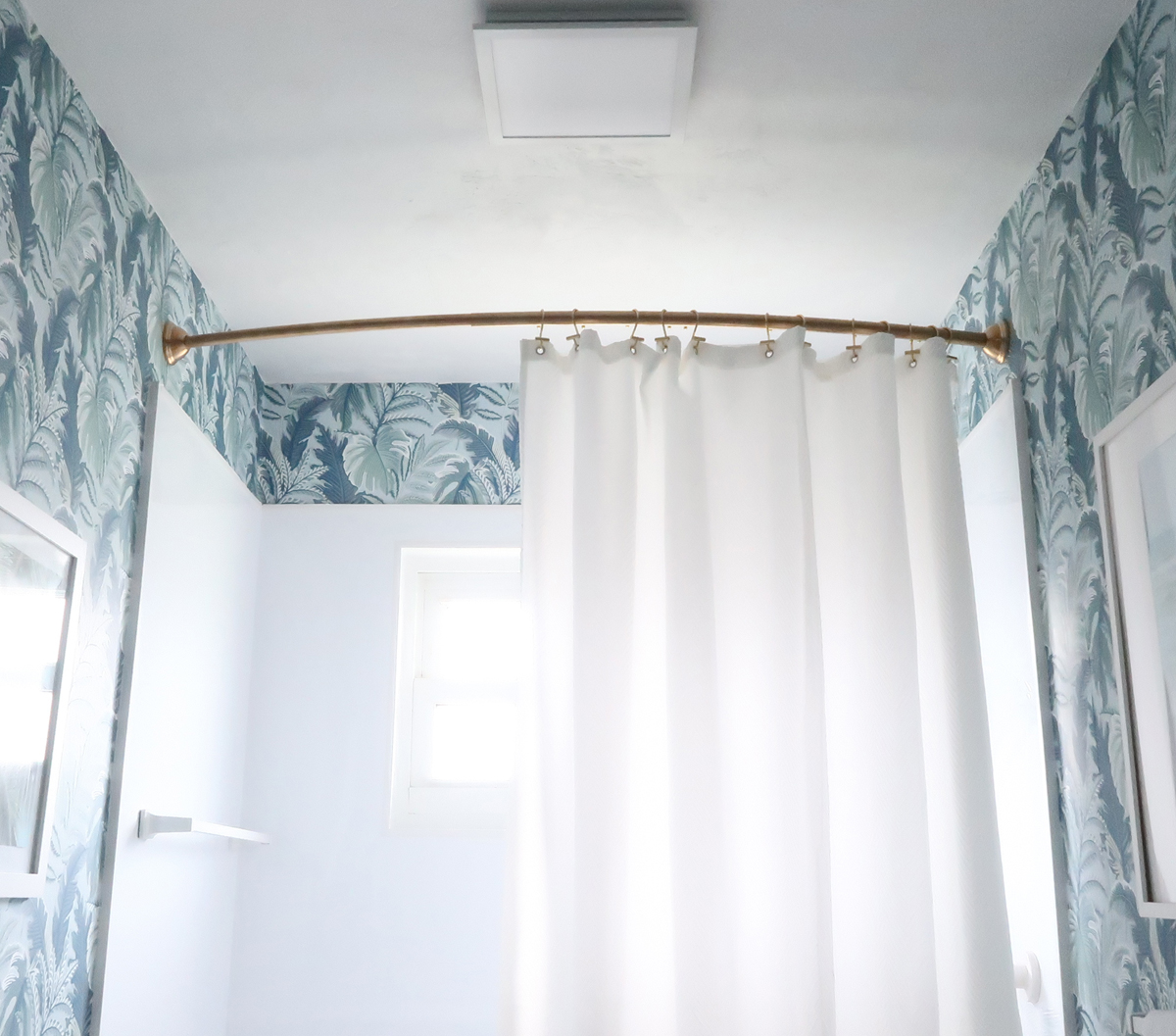 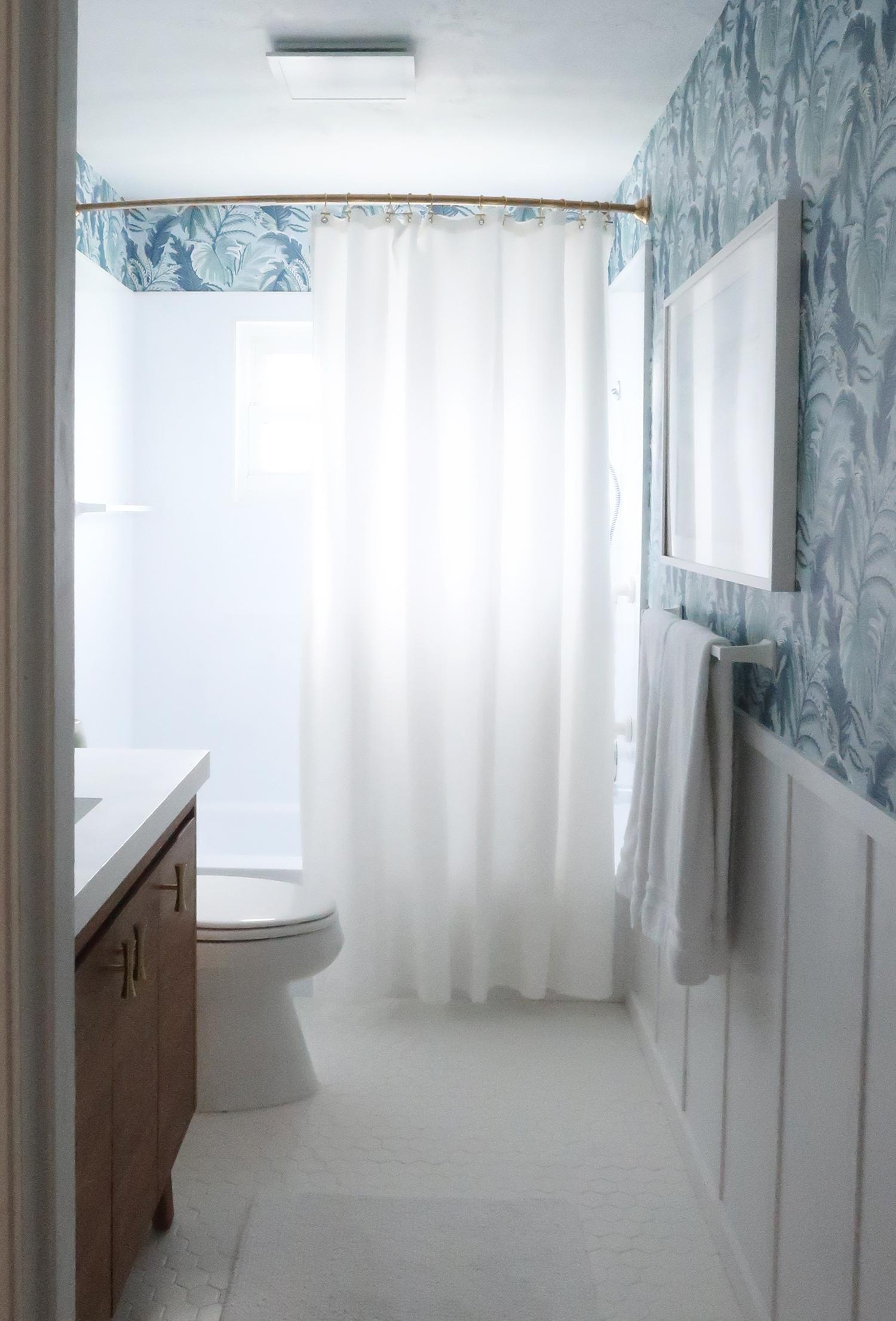 Instead of drilling into that beautiful teak vanity I bought a freestanding toilet paper roll holder. I also win the award for cutest waste bin ever! How great is this push top can with its wood tone top and mid century legs? Adorable! I also replaced the old silver toilet flush handle with a white one – those details matter to me! 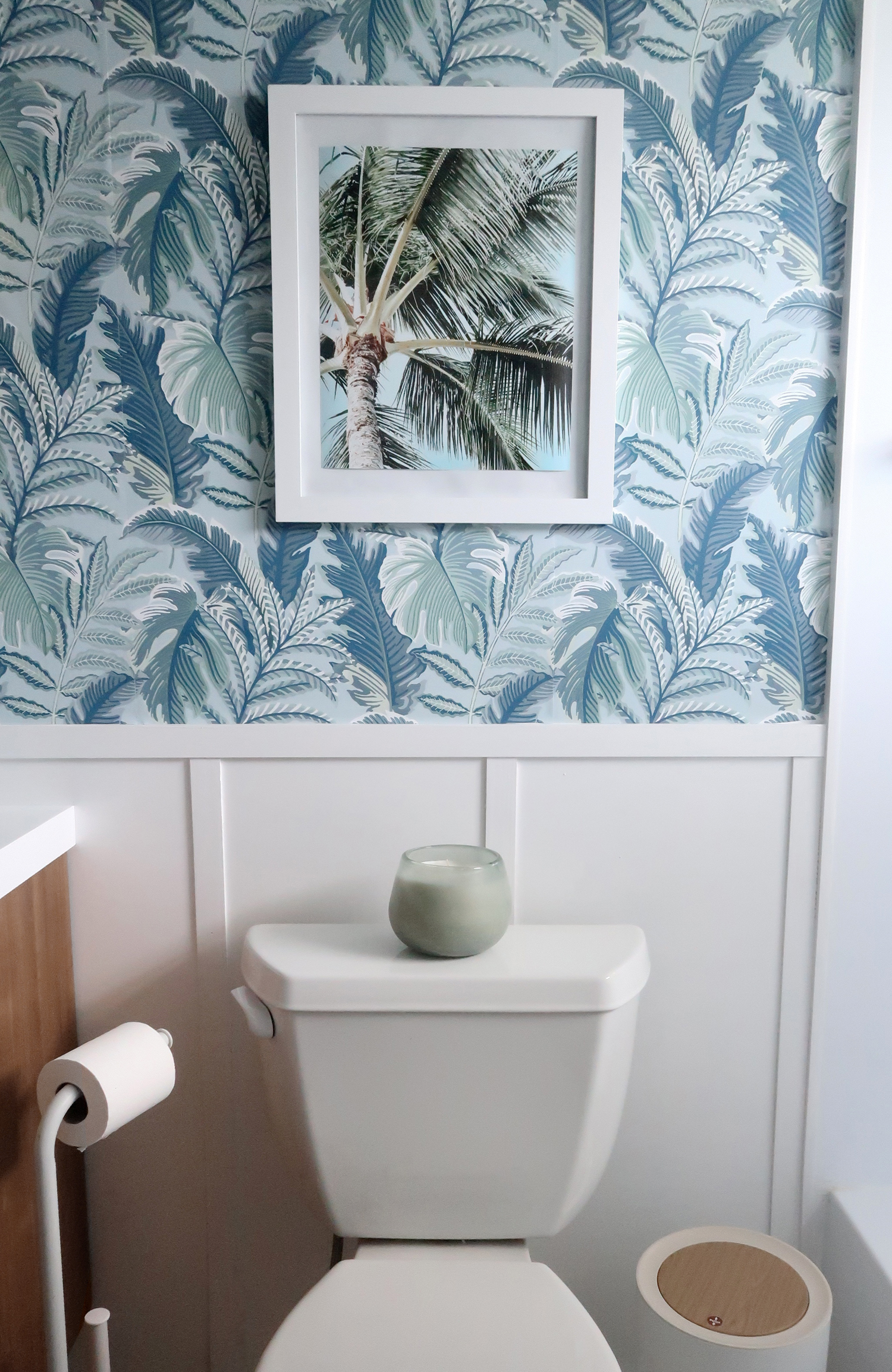 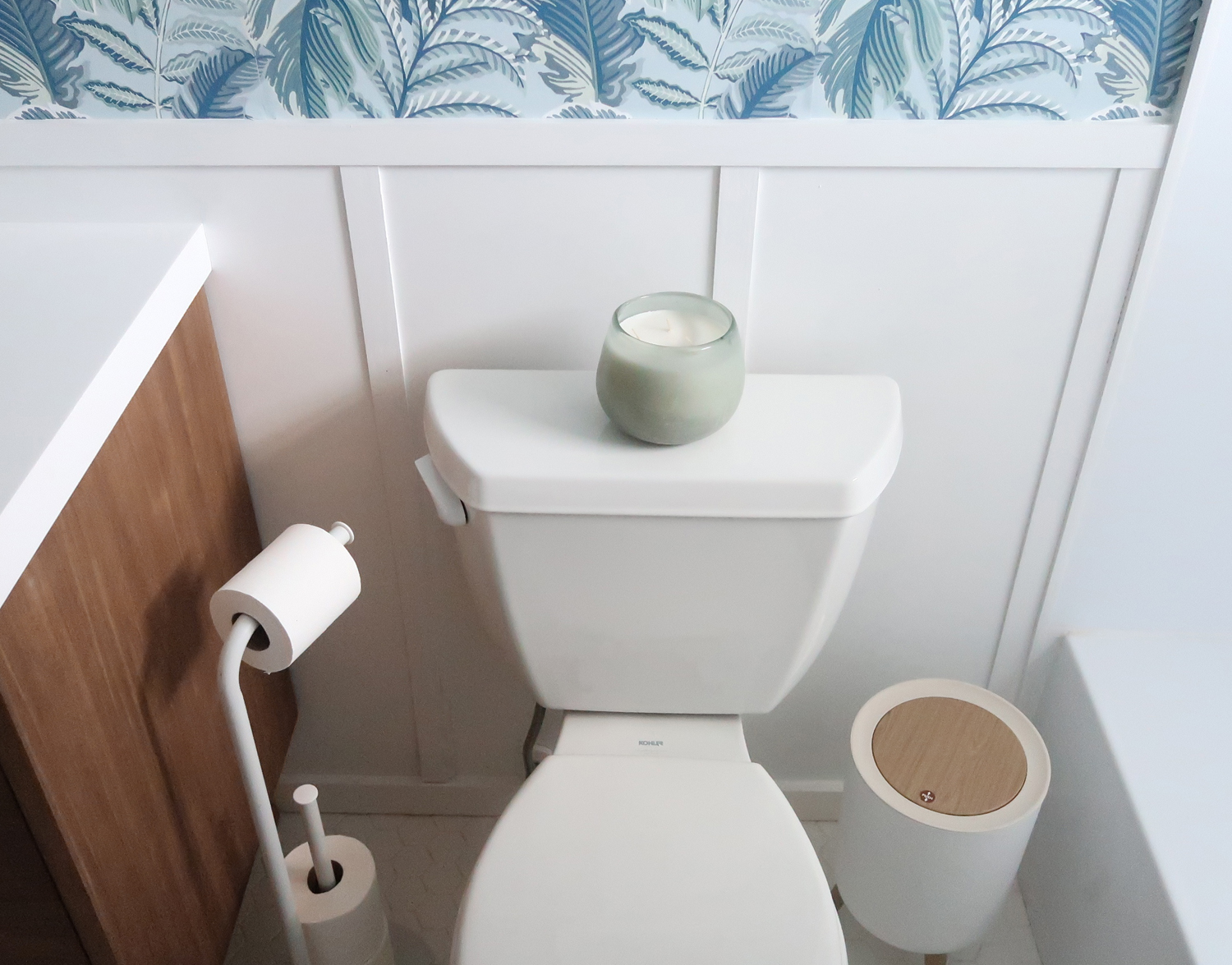 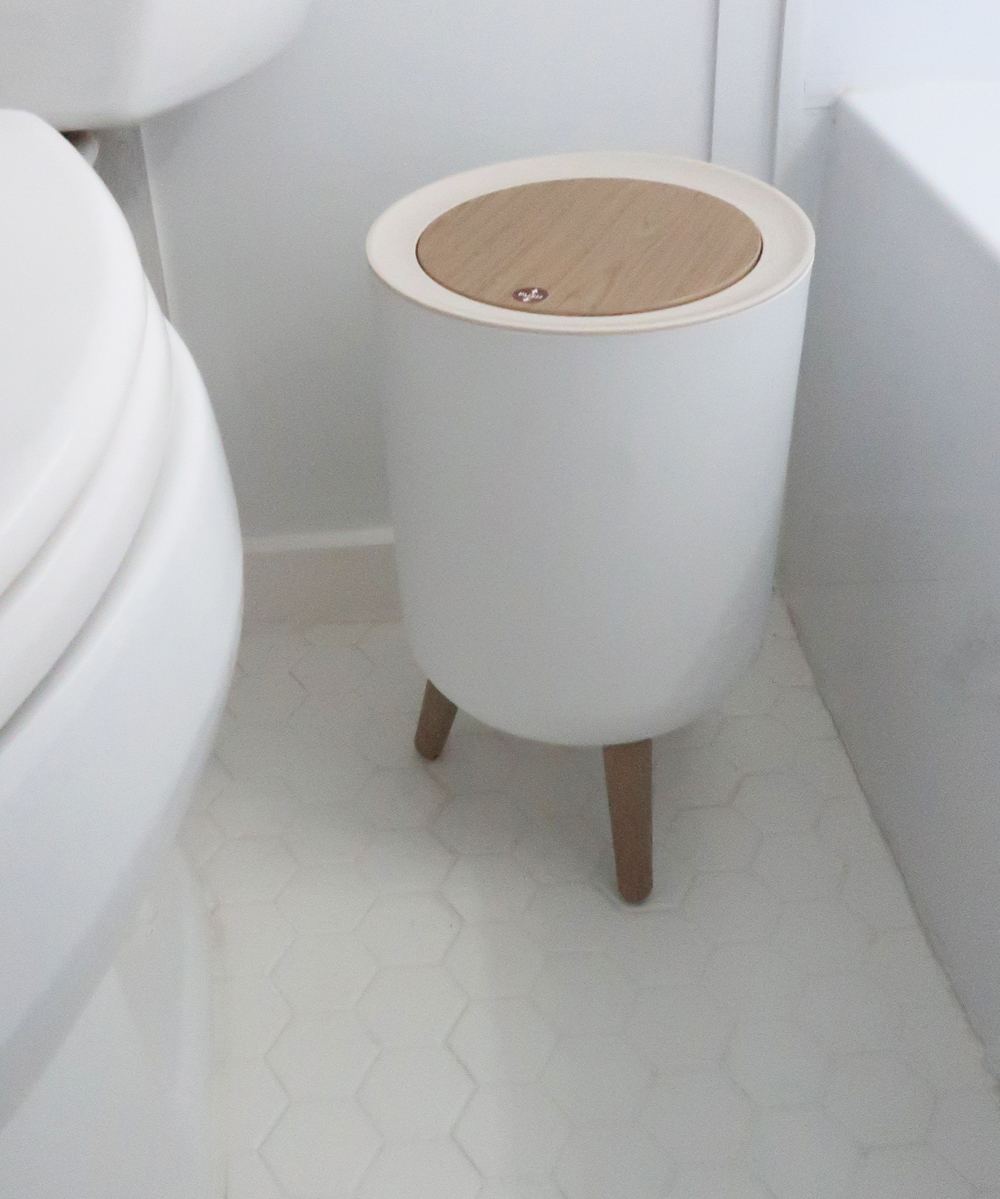 I’m so pleased with how it turned out! It’s a lovely mix of coastal and mid century style in classic blue and white, and the wood vanity adds beautiful contrast. 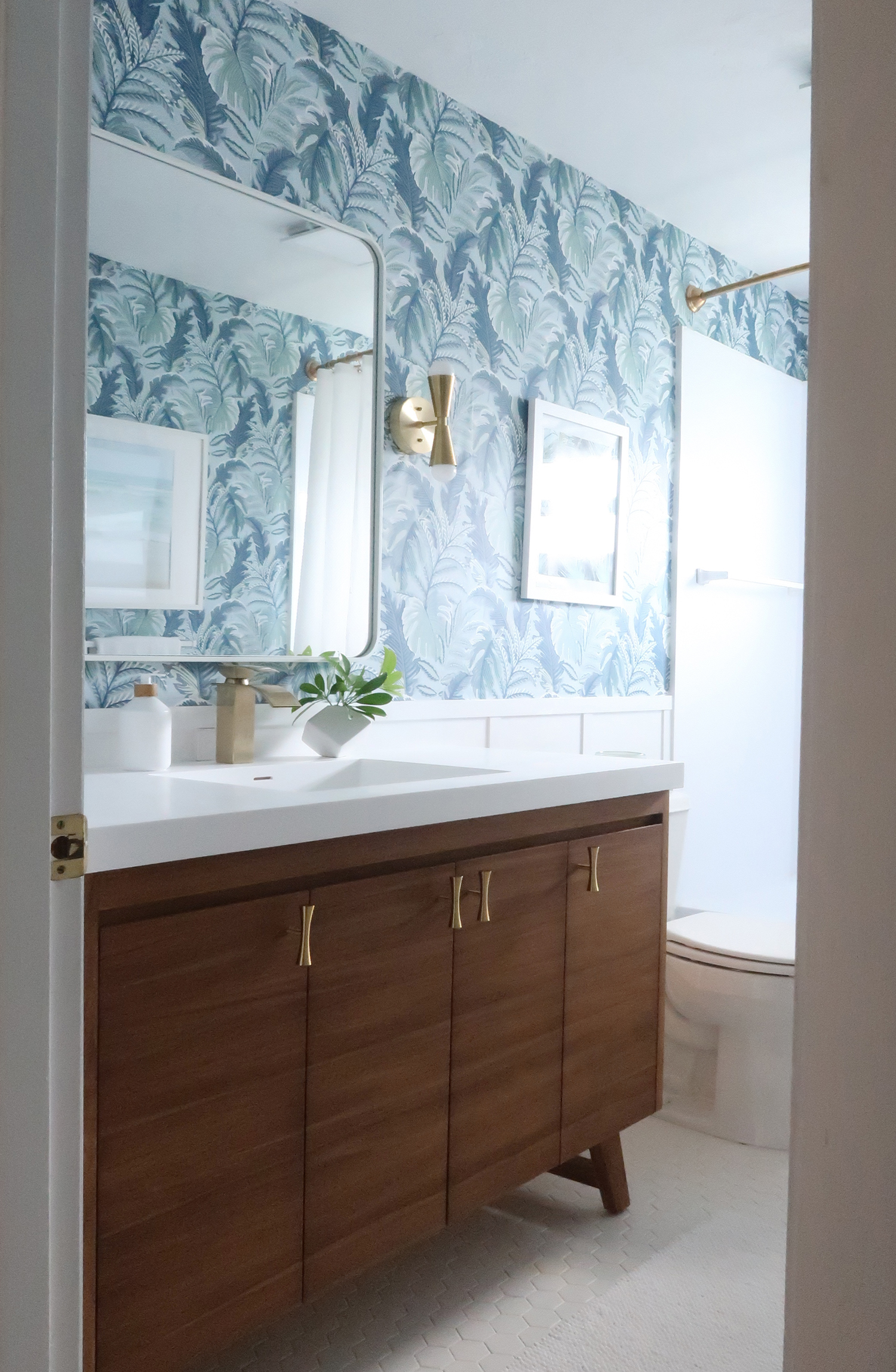 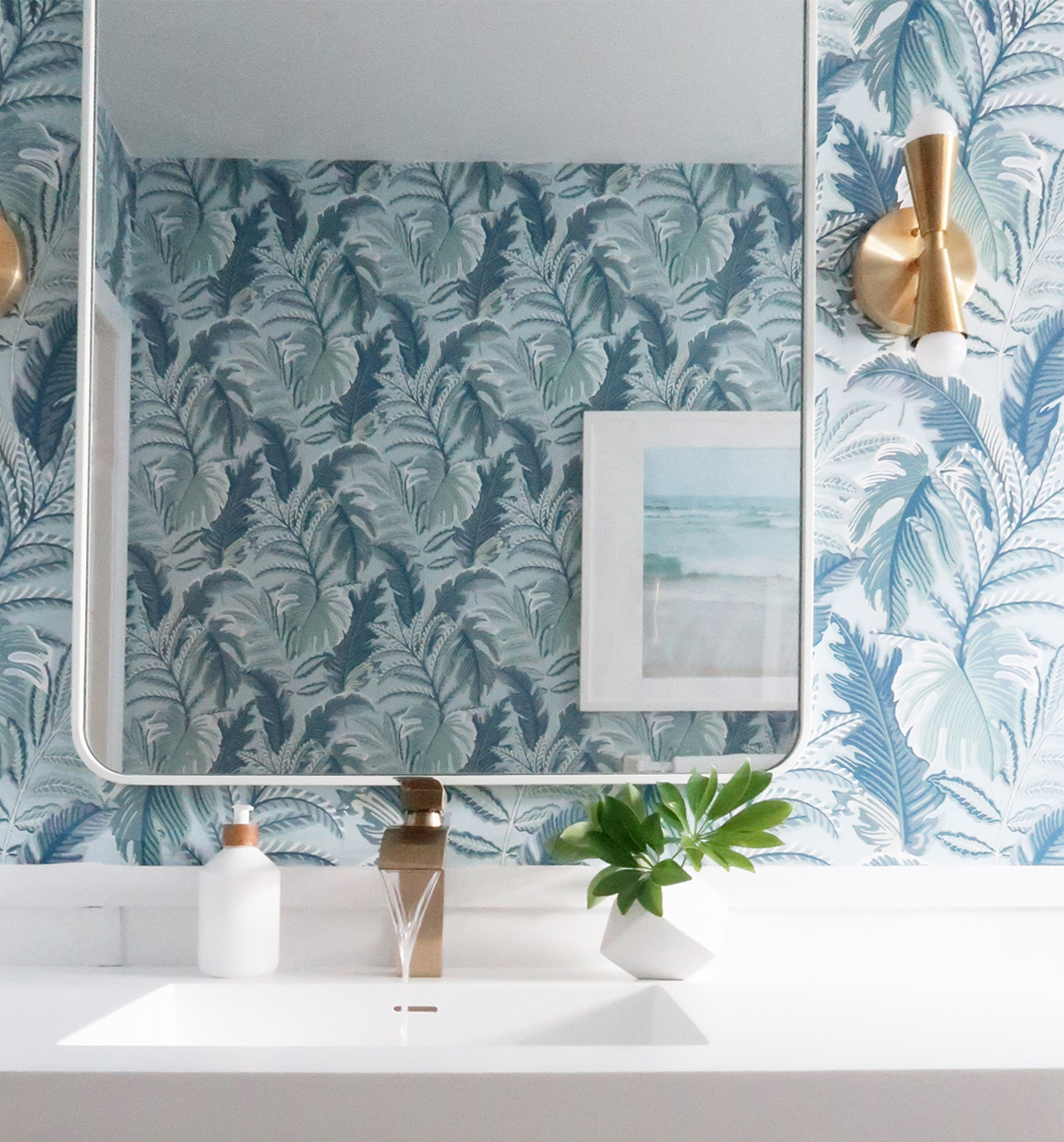 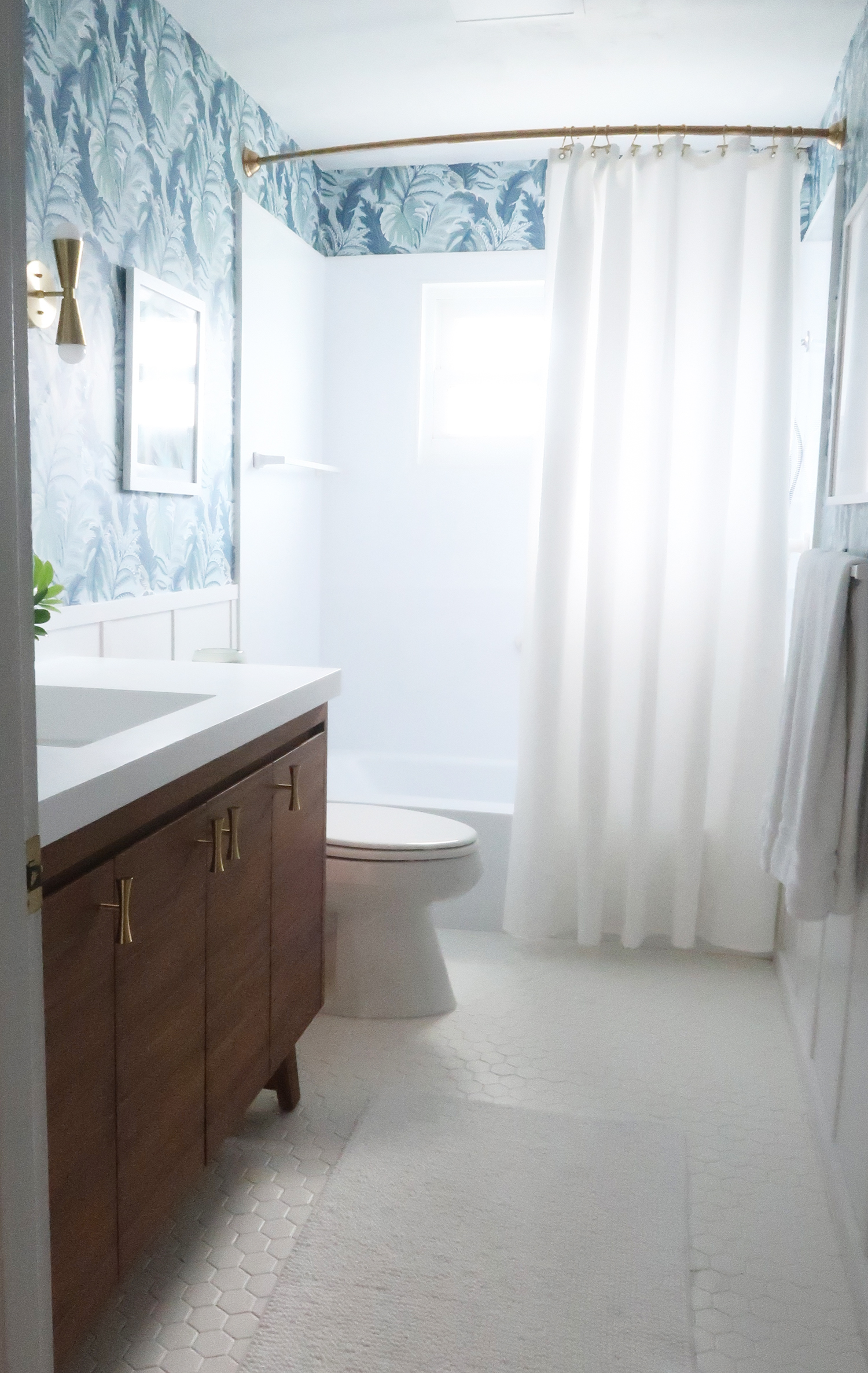 This A frame cabin makeover by @saffronandpoe feat

Hello September! Fall is in the air so it was time

I love light and bright kitchens with a simple tim

I bought a new plant baby yesterday at @botanyzhi

I added a pair of asymmetrical sculptural vases to

On the blog find the link to this elegant coastal